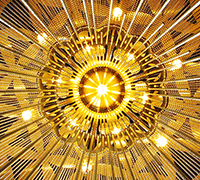 After having managed public relations and communications for Willowlamp since 2014, Scout has now been appointed to handle all marketing responsibilities for this award-winning South African designer lighting company. The expanded service offering will commence as of March 2015.

Owner and Director, Lauren Shantall possesses many years of design industry experience. After working as deputy editor of ELLE Decoration magazine, she later moved on to become the Editor of Design Indaba magazine – during which time she was awarded the Communication Arts Award (USA). Lauren is also a former curator and manager of the Design Indaba Expo. The Design Indaba won a Gold Loerie for the best event of 2007, an EIBTM award for best event in the world, and the magazine was the recipient of a PICA award during her tenure there. She is delighted to have her company represent the work of Willowlamp and looks forward to guiding its success further.

Scout takes pride in helping local brands expose their products to a wider market, both locally and internationally. The Cape Town integrated communications agency eagerly anticipates unveiling the wonderful work of Willowlamp to the rest of the world.

Willowlamp has an inherently African feel, but the lighting designs transcend borders; Willowlamp chandeliers have been recognised internationally and may be seen hanging in the likes of the Ritz Carlton Hotel Dubai and the Seerose Resort and Spa in Switzerland.