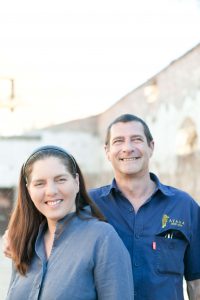 Lauren Shantall (Pty) Ltd is pleased to announce that it has been appointed by Ayama Wine Farm to assist with an upcoming, historic auction of Ayama’s newly produced Vermentino – the first-ever release of this wine in South Africa.

Situated in Paarl and founded in 1685, Ayama is recognised for its various ranges of white and red wine, and MCC. Added to that, its production of olive oil, Sicilian and Jerusalem artichokes, and durum wheat, makes it a haven for those seeking wholesome and organic foodstuffs.

Ayama has now realised its vision of growing and producing the first-ever Vermentino in South Africa, a white wine varietal that it introduced into the country. The grapes were first planted at Ayama in 2014, under the direction of estate owners Attilio and Michela Dalpiaz. Vermentino is commonly grown in Italy, particularly Sardinia.

On 16 June 2017, 1500 litres of limited edition Ayama Vermentino will be auctioned at Roodebloem Studios in Woodstock, Cape Town. As the event coincides with Youth Day, proceeds will go towards Perdjie School, a kindergarten opened in 2015 in the Ayama area.

Scout will act as media liaison for the auction. In addition, the agency is identifying and organising the auctioneer that will preside over the event.

Scout is an integrated communications agency based in Cape Town. The team boasts a range of expertise and offers a broad array of communication strategies spanning social, digital and traditional marketing and perception management.